Clevedon Pier and Michelle in her gold Pier Hat

December 2017: I am getting a few more of these hats in within days, but in quite limited numbers. If you can’t find them in the shop, please email me for an update.

I swim at Clevedon, in the Marine Lake and in what we like to call the sea, though you may call it the Bristol Channel if you wish, and this is a little project that came out of a discussion between a few people that I swim with. Someone said we could get hats printed with our name on… in the event that we decided on a name. I suggested that they also needed a picture of the very fine Victorian Pier at Clevedon on them and offered to draw it. Everyone liked the idea of the pier and nobody could decide on a name, so we now have rather funky nameless, but not pierless, hats. (We have since become Clevedon Lake and Sea Swimmers, a.k.a. CLASS, but that came too late for the hats).

So many hats were printed – about 75, that we also donated £1 per hat to MARLENS – the charity responsible for the restoration of our beloved Marine Lake. Which explains the articles in the local papers. The current print run did not include a donation to MARLENS, instead, I have designed a hat especially for them, due to be released in the spring of 2017

Now into its third print run, Clevedon Pier hats may be purchased from my Etsy shop, while stocks last. 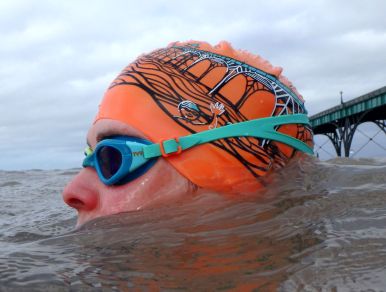 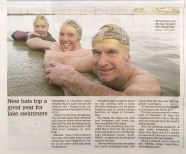 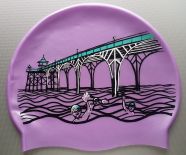 Not usually one for photographing my dinner, but it's new year's eve and I was put on pudding duty. 2 kilo chocolate tart. Shown here with Arthur for scale. It has subsequently been removed from Arthur's vicinity.
My paintings are on display in Loves Cafe in Weston-super-Mare this month and all through January!
Winter is coming....